Gene Chizik: From Hero to 'Hot Seat' in a Flash 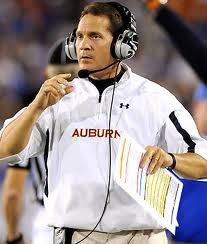 There's a couple of different ways to look at all of this Auburn/Gene Chizik talk going around now. In case you've missed it, there are strong feelings circulating that Chizik should be in fear for his coaching life. First glimpse shows that his Tigers were National Champions in 2010 with an unblemished 14-0 record. That was not quite two full seasons ago. That might lead you to ask how he could be in trouble for his job this soon after that championship season? But dig a little deeper, if you will. At both Iowa State and Auburn University combined, his coaching record is a not so impressive 36-33. Not to mention the fact that without the athletic services of one Cam Newton, Chizik's record is a dismal 22-33. I've maintained since that perfect season, without going out and buying Newton, the Tigers would have been very average that year. As I type, Auburn is 1-4 this season, and that lone victory came against a very commendable Louisiana-Monroe squad. In overtime no less. Saturday Auburn got dusted at home by a weak Arkansas team 24-7. My point here is that when you look at the whole body of head coaching work done by Gene Chizik, it really isn't surprising that his job might be in jeopardy. After all, Auburn has sent 'em walking before for much less that this. Just ask Terry Bowden and Tommy Tubberville.